OPALGA+…the Next 30 Years and Beyond

In 2019, OPALGA became OPALGA+. The plus is reflective of an organization that is inclusive of all who live under the rainbow flag of sexual orientation, gender identity, ethnicity, non-conforming, allies, and the many others in the LGBTQIA+ community. OPALGA+ continues its mission to promote full equality and positive attitudes toward the LGBTQIA+ community. 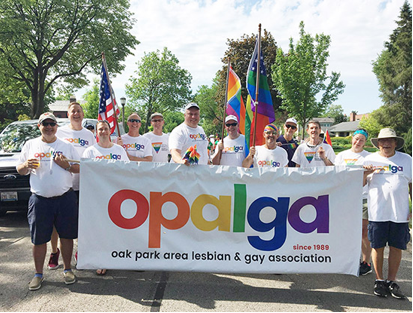 While great strides toward equality were made by OPALGA and the nation at large in recent years—perhaps best represented by the Supreme Court’s ruling in 2015 that legalized gay marriage in the United States—challenges remain. New and renewed political battles continue in the Trump administration and in the courts over LGBTQIA+ representation and rights.  Workplace discrimination against LGBTQIA+ people, marriage rights, transgender discrimination and exclusion, and a range of other issues are expected to be out front during the 2020 national election cycle and in a large number of states.

Now we can go any place we want and feel comfortable [in Oak Park].