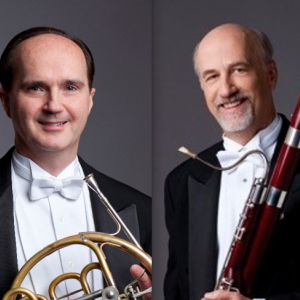 Have you ever listened to a symphony orchestra and wanted to know more about the musicians? Why did they choose the instruments that they are playing? How did they become members? How many hours a day do they practice? What are their lives like outside of the orchestra?

On Tuesday, October 11, at 7:00 p.m., David Griffin and Dennis Michel, two members of the Chicago Symphony Orchestra, will be at the museum to demonstrate their instruments and discuss their experiences as orchestral musicians. This is a rare opportunity to learn about a profession that is foreign to most of us from two men who are our neighbors in Oak Park.

This is a free event open to everyone. Freewill donations to help support OPRF Museum programming will be gratefully accepted. Drop-ins are welcome, or you can reserve your seat by contacting us on our website or at 708-848-6755.

Dennis Michel retired from the Chicago Symphony at the end of their 2021-2022 season after serving as second bassoonist for 25 years. He continues as Artist Teacher of Bassoon at Roosevelt University. Prior to his appointment in Chicago, he was principal bassoon for the San Diego Symphony. As a Fulbright scholar, Michel studied in Vienna under Milan Turkovic, a renowned bassoon soloist and conductor. Michel has performed at numerous summer festivals including Tanglewood, Grand Teton Festival, and the Bard College Festival. He has served on the faculties of Northwestern University, University of Southern California, University of California at San Diego, and San Diego State University, and has been a member of the Music Academy of the West faculty in Santa Barbara since 1988.

David Griffin is the fourth horn of the Chicago Symphony Orchestra. He began his career with the Rochester Philharmonic and then played with the orchestras of Montreal and Houston before joining the Chicago Symphony in 1995. Griffin has served as guest principal horn of the Los Angeles Philharmonic, Saint Louis Symphony, Saint Paul Chamber Orchestra and Shanghai Radio Orchestra. With the wind quintet Prairie Winds, he has performed in more than 25 states and has released two CDs. As a member of the CSO Brass Quintet, Griffin has toured Japan, China, Taiwan, and Mexico. Griffin is Artist Teacher of French horn at Roosevelt University and has previously taught at McGill University and Northwestern University. Summer festival engagements have included Sun Valley, Grand Teton, and Tanglewood. Griffin has also been a featured artist and clinician at the annual symposium of the International Horn Society.