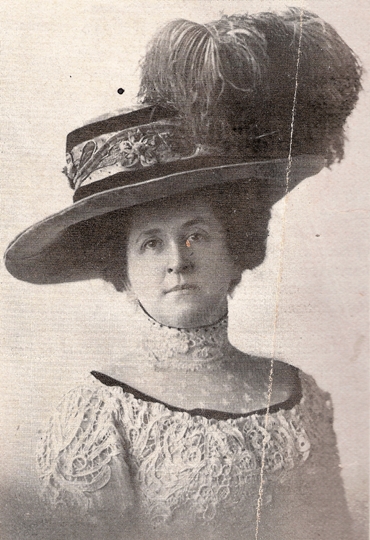 Although often overlooked, Grace Wilbur Trout made crucial contributions to the women’s suffrage movement in Illinois and nationally.

Born in Iowa, she married George Trout there and relocated with her young family to Chicago in 1892, and to Oak Park in 1903. Her novel, A Mormon Wife, was published in 1896 to great success. In Oak Park she moved easily into the company of educated, mostly well-to-do women who were challenging the 19th century’s view of women as having a separate and subservient role. She quickly became involved in the push for suffrage.

Elected president of the Chicago Political Equality League in 1910, Trout began to enlist the support of prominent men, including Chicago mayor Fred Busse and Oak Parker John Farson, to the cause of suffrage. Borrowing a Farson idea, she organized auto tours through several suburbs, giving an opening speech at each stop. Subsequent speakers complained that she talked too long, giving them too little time, but the tours proved to be very successful.

Trout’s organizational and political skills were instrumental in passage of the Illinois Presidential and Municipal Voting Act of 1913. She abandoned the confrontational style of lobbying state legislators, working instead to quietly enlist individual legislators to the cause, and to establish a local suffrage organization in every legislative district. Thus Illinois became the first state east of the Mississippi to allow women to vote in presidential elections and for all other offices not specifically prohibited by the Illinois constitution.

Trout and her colleagues continued to work for complete suffrage in Illinois and for passage of the 19th amendment to the U.S. Constitution, which would prohibit the states and the federal government from denying the right to vote to citizens of the United States on the basis of sex. In 1919 Illinois was the first state to ratify the 19th amendment to the U.S. Constitution.

After the amendment passed, Trout was a key founder of the League of Women Voters. She moved to Florida in 1921, where she remained active in local and national politics.

Grace Trout was ahead of her time (and ours?) in many ways. At a luncheon in her honor at Chicago’s Congress hotel in 1923, she praised “the spirit of co-operation that helped the suffrage movement” and went on to speak about the importance of education. “Why in the name of common sense do we not have an official in the president’s cabinet with education as his sole duty?” It would not be until 1979 that the Department of Education was created.

On the subject of war and peace in the aftermath of World War I, she talked about a plan that called for the draft not just of fighting men but of capital and labor in time of war. “If every bank account would be mobilized instantly as soon as war was declared there wouldn’t be any war. If men knew there would be no excessive profit…there would be no war.”[i]

During the centenary of the Nineteenth Amendment, the League of Women Voters of Oak Park-River Forest, the Oak Park River Forest Museum, and the Nineteenth Century Charitable Association successfully lobbied to have her recognized on the National Votes for Women Trail with an historic marker on the site of her Oak Park home.

For the complete story of Grace Wilbur Trout and the suffrage movement, check out The Woman Who Never Fails, available in our gift shop.