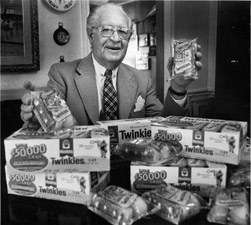 James A. Dewar (1897-1985) invented a guilty pleasure for many Americans - the calorie-rich but tasty Twinkie that can be found in grocery stores and kids' lunchboxes across America.

In addition to being tasty, the Twinkies solved the problem of idle machines after strawberry shortcake season ended.

"Mr. Twinkie," who lived in Oak Park and River Forest for 50 years until his death at 88, bragged that he was a chain smoker and that he would enjoy at least three Twinkies with a glass of milk before bedtime.

Dewar also credited both his sons' athletic success to eating Twinkies - one played for the Cleveland Browns.

According to Hostess, approximately 500 million Twinkies are sold every year.

Find out more about the Twinkie in this Museum Minute, created by Joe Kreml of the Village of Oak Park.