In October of 1986 floodwaters from the overflowing Des Plaines River transformed two blocks of Lake Street and most of River Oaks Drive into canals. Some River Forest residents were forced to evacuate their homes, while others were left to fight “basement lakes”.

The flooding reached such a high level that the National Guard was called to assist residents, and at the same time bring some much needed comic relief.

Volunteers arrived in mass numbers to help sandbag and protect their neighbors’ homes and businesses. The burst of community pride only inspired more to get involved, including local schools and businesses.

So many came out to support their community that in the October 8th edition of the Forest Leaves the Village took out a space to express their gratitude to all those that contributed.

Unfortunately this is not the first time that the Des Plaines River has flooded River Forest. The river has been overflowing since the turn of the century as documented by famed local photographer Philander Barclay in 1903. If you are interested in more about this or about other historical topics please contact the Historical Society at 708/848-6755 or email oprfhistorymatters@sbcglobal.net . 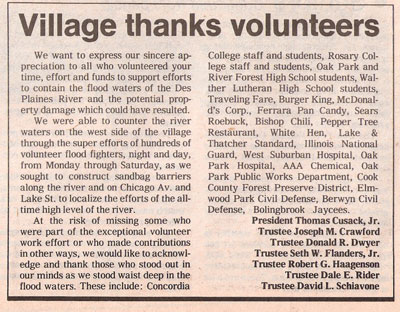