Oak Park and River Forest played host to the 17th Biennial International Hemingway Society Conference from July 17 to July 22, 2016.  Partners in the conference included the Ernest Hemingway Foundation of Oak Park and Dominican University in River Forest.  The society alternates between domestic and international sites that were significant to Hemingway, and 2016 was Hemingway’s home town year.

While conference participants had a host of activities to experience, including lectures, exhibitions and tours of Hemingway related sites in Oak Park, River Forest and Chicago, they also had the opportunity to visit The Historical Society of Oak Park and River Forest to view its modest exhibit of Hemingway artifacts. These included: 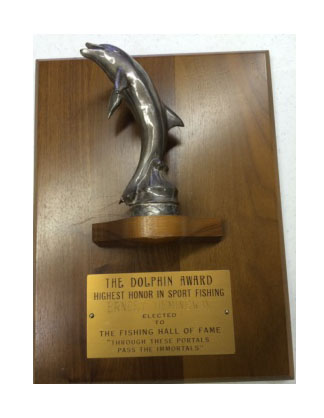 The Dolphin Award, “The Highest Honor in Sport Fishing”, and with it entry into the Fishing Hall of Fame. While the history of the Dolphin Award’s sponsor is somewhat murky, it appears to have been a predecessor organization to the International Game Fish Association (IGFA), which officially inducted Hemingway into the IGFA Hall of Fame posthumously in 1998, along with luminaries from the worlds of sport, literature, and entertainment as well as professional and  amateur sport fishing. Hemingway served as an IGFA vice president from 1940 until his death in 1961. Details and an IGFA film of Hemingway’s involvement in sport fishing can be found at https://www.igfa.org/Museum/HOF-Hemingway.aspx.

Yousuf Karsh Reflection. Karsh, one of the greatest portrait photographers of the 20th century, photographed Hemingway in 1957 for his 1959 book Portraits of Greatness.  As part of his process, Karsh talked with his subjects as he composed the portrait.  Within the pages of the book he wrote his impressions of those he photographed. A framed page of his reflections on Hemingway is included in the Historical Society exhibit: “The shyest man I ever photographed. Therein, I imagine, lies the secret of his work. He has felt in his soul, with lonely anguish, the tragedy of our species, has expressed it in his writing, but, for self-protection, has built around himself a wall of silence and myth.”

The portrait was used in the design of the U.S.  Postal Service Hemingway commemorative stamp issued in 1989. A First Day Ceremony for the 25¢ stamp was held on July 21, 1989, on what would have been Hemingway’s 90th birthday, at his Oak Park birthplace. The portrait was also used as the cover of the Karsh book, Regarding Heroes, published in 2009.

Christmas Letters to Family. Hemingway was a prolific letter writer, and many of those were to his family.  Two of these, Christmas letters, are included in the exhibit. The first, addressed to his mother Grace Hall Hemingway, sister Madeleine (Sunny), and brother Leicester (Les) was sent December 20, 1931 from Hemingway’s new home in Key West, FL. The letter suggests a man under stress, with comments about his wife Pauline’s poor health and hospitalization following the birth of their son Jack a month earlier; the “joys of traveling with new born babies”; “working 18 or so a day” on a book (probably Death in the Afternoon); a new home that “will be fine when fixed up”; and lack of money – “These Christmas checks are small on account no money.”

The second letter was sent to his mother December 20, 1933 from Nairobi, Kenya while on an African expedition.  He commiserated with his mother about her broken leg and included a check “as know you will be having other expenses”.  He also referred to the November 1933 death of “Uncle Tyley”, Benjamin Tyley Hancock, his mother’s uncle who roomed on the second floor of the Hemingway home and was close to young Ernest.  As he put it, “Can’t write about Uncle Tyley.  Feel too badly that he is gone”. 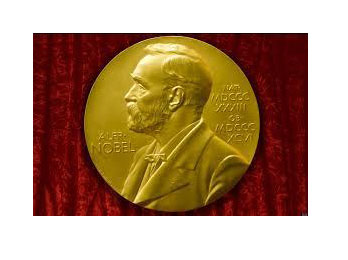 The Nobel Prize Speech In October, 1954 it was announced that Hemingway had won the Nobel Prize for Literature   "for his mastery of the art of narrative, most recently demonstrated in The Old Man and the Sea, and for the influence that he has exerted on contemporary style". His first reaction was to declare there were other writers more worthy of the honor, including Carl Sandburg, but accepted the prize because he needed the money.

Having recently been severely injured in two plane crashes, on successive days, while on safari in Africa, Hemingway was still recuperating and said he would not be able to attend the prize ceremony in Stockholm.  Instead, he asked the U.S. ambassador to Sweden, John M. Cabot, to read the seven paragraph acceptance speech Hemingway had prepared. Affirming, perhaps, Yousef Karsh’s reflections, he wrote “Writing, at its best, is a lonely life.” The writer “…does his work alone and if he is a good enough writer he must face eternity, or the lack of it, each day.”

The Weatherby Letter. In addition to his fame as a writer, Hemingway was well known as an  outdoorsman – sport fishing, wild game hunting—and an aficionado of bullfighting, the subject  of his book Death in the Afternoon.  In January 1949 an acquaintance and admirer, J.K. Weatherby, wrote Hemingway to ask if bulls were colorblind.  Writing from his longtime retreat, Villa Aprile in Cortina D’Ampezzo, Italy, Hemingway opined on the subject, suggesting bulls had minimal color perception.  He went on to give his opinions on the senses of sight and smell of other animals as well. 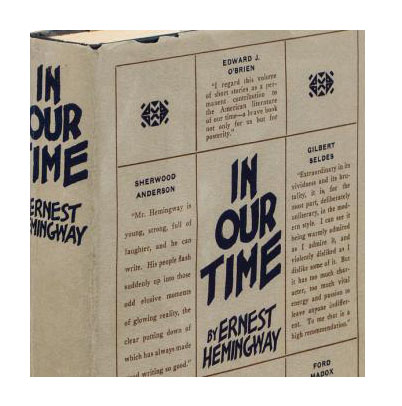 The Blodgett Letter. Glen Walton Blodgett was a prodigious autograph seeker who carried on   correspondence with noted celebrities and authors including Hemingway and Theodore Dreiser  (who provided advice on Blodgett’s own writing).  Blodgett, in writing to Hemingway, invited him to review his autograph collection and, apparently, asked Hemingway to provide a writing sample from his work.  In his response, written in 1928 from the Hotel Rosslie in Gstaad, Switzerland, Hemingway provides the first line from chapter one of his book of short stories, In Our Time: “We were all drunk. The whole battery was drunk going along the road in the dark.”