“The sweet smell of decay, the site of broken windows, the quiet hissing of steam greets the rare visitor to the Oak Park Conservatory. ‘This must have been beautiful once, with the cobbled walks, the waterfalls splashing, perhaps even birdsongs,’ the visitor remarks.  ‘The walls that once cascaded with plants are barren, showing the peeling wood.  The vines breaking through the glass panes. Why would anyone want to keep a Conservatory, anyway?” (Letter to the editor, Oak Leaves 2/25/70). 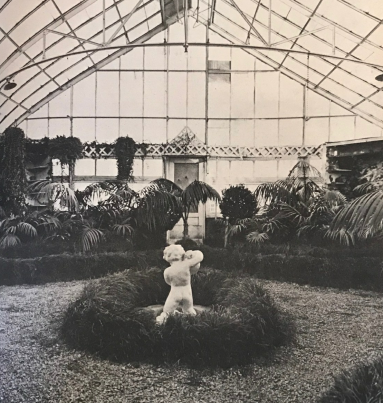 In February, 1970, this was the prevailing view of many Oak Parkers who also recommended that the Edwardian style 1929 structure be torn down and replaced with a parking lot for the new Rhem Park pool across the street. The battle for destruction versus restoration continued throughout the next several months, including a period in April and May which saw the Conservatory shuttered due to the hazard of falling glass inside the fragile and decrepit 1929 building.

The issue appeared to have been resolved in July when the Oak Park Park District, owner of the Conservatory, held a referendum to raise $85,000 in taxes to save the building.  The referendum failed by a wide margin.

What succeeded, in response, was a grass roots movement of hundreds of people to save the Conservatory.  Elsie Jacobson, a prominent civic leader who was the first female president of the School Board and helped found the Historical Society of Oak Park & River Forest as well as the Frank Lloyd Wright and Ernest Hemingway foundations, established the Citizen’s Committee for the Conservatory and asked the Park District for time to let the committee put the Conservatory on a stronger fiscal footing. The Park District gave the committee six months to raise enough funds to keep the building going. Having successfully done so, the village allotted $12,000 to “retain, repair, and expand programming at the Conservatory.” At the same time the Citizen’s Committee continued its fundraising work and volunteers donated their time and talents to help with the renovation. 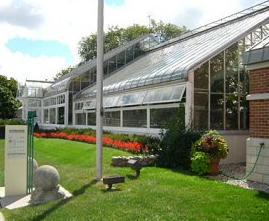 In the 50 years that have followed, the Conservatory paid $1 to the Board of Education to buy a small building to use as a mobile classroom, the Earth Shelter; put in a new heating system; and expanded space and facilities for both indoor and outdoor education. In recent years it opened the Elsie Jacobson Discovery Garden, installed solar panels to lower electricity costs, cisterns to collect rainwater, and beehives for pollination. The bees have been joined by both birds and fish.  There are three Conservatory showrooms, the Mediterranean, Tropical, and Desert rooms. The Conservatory provides 8,000 square feet of growing area, making it the third largest conservatory in the Chicago area, and contains more than 3,000 plants. And the Citizen’s Committee lives on, with the Friends of the Oak Park Conservatory raising hundreds of thousands of dollars through regular fundraising programs.

The Conservatory, located at 615 Garfield Street, welcomes 50,000 visitors annually and is one of the top three historical sites in Oak Park. In 2005, the Conservatory was added to the U.S. National Register of Historic Places.